“Let’s go! Time to get tough. Dig, it’s racing time!” George Zack yells at runners from Broomfield High School as they pass by him on the third and final lap of the 4.5-kilometer course at Valmont Bike Park. Ten area high schools came out on Friday afternoon to compete in this season-opening race, the Valmont XC Challenge sponsored by New Balance and Flatirons Running. Zack was out there to cheer on his two kids, a freshman and a senior, who run for Broomfield. They were seeded in two of the seven races that night.

The race is unique in that the course is too small for a large field, so the teams are split among seven fields, boys race with the girls, and teams compete within each race, so there is a bit of strategy to where you place your runners. Other schools that were represented were Broomfield, Centaurus, Dakota Ridge, Green Mountain, Horizon, Longmont, Lyons, Mountain Range, Nederland, and Thompson Valley

The 3 lap course is ideal for spectating as it starts near the entrance of the Valmont Bike park with a flat and fast start but within 300m or so took a turn up some steep switchbacks called the “Corkscrew” to the top ridge of the park. The course winds down through single track to the bottom of the hill where it turns and goes straight up the staircase “The 5280′ Run-Up”, a popular viewing spot for the many Cyclocross races that are held there. Then the course winds on the north side of the park either coming through the loop or

Zack commented, “It’s a good opportunity for runners to learn how to race. You can’t take it out too hard as there a hill almost immediately. Since it’s an off distance it’s a good rust-buster as the first race of the season”. 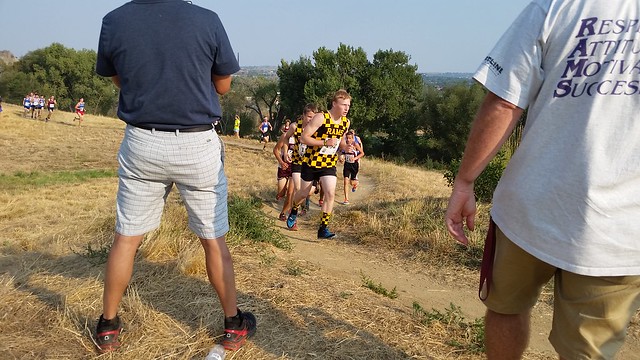